Saffron’s free, interactive seminar with IBC takes place in Theatre 1 at 10.15am on 28 January at the Learning Technologies exhibition.

I like to think that 2015 is the year that most of us realised we were now, in fact, living in the future. As I drunkenly yelled for several hours on New Year’s Eve, 2015 is in fact ‘the future’ of Back To The Future.

Alas, I did not ride to work today on a hoverboard. In fact, once again my bus was terminated early -so even the paltry illusion of hovering which arises from sitting at the front of the top deck was shattered…. Miserably I walked, barely a few steps ahead of Homo Erectus…

But wait – maybe not all of the predictions were wrong. Wearable tech is pretty prominent in the Back To The Future future, like Marty’s self-drying jacket. There’s also video glasses surprisingly similar to Google Glass and ‘PowerLacing’ shoes which tie themselves. But the big part of the future which is missing in Back To The Future is the internet. This omission is quite odd because the internet in its modern form (using the TCP/IP protocol) did in fact already exist as early as 1981.

The internet is a key component of the third industrial revolution: the digital revolution. (The first two were to do with the steam engine, and the production line.) The other components are fast, cheap computing power and automation – which reaches scary new levels of disruptive with technologies like additive manufacturing.

This revolution is why our reality feels like the future – the world is changing so quickly that history itself seems to have gone into a tailspin. Like previous industrial revolutions, the digital transformation is busily reconfiguring time and space (even if that’s as banal as controlling your heating from your phone) and a new type of human is emerging from it.

This human is no longer the ‘digital native’ or the ‘digital immigrant’ but the human to which there is no distinction between the digital world and the offline world. She is a digital citizen and the world is her operating system. Her tolerance of any form of oppression, whether that is poor government or poor user experience, is extremely low. Digital disruption changes the game for organisations too, and my article in the showguide edition Inside Learning Technologies and Skills is all about how L&D can survive this wave of digital disruption.

So what does it mean for elearning? Our free seminar with our friends at IBC is all about how your approach to learning and performance can surf the digital wave, or else drown in it. And make no mistake, PowerPoint-on-Steroids will not survive the digital revolution. Static, non-interactive and non-collaborative ‘elearning’ is more a product of Taylor’s production line than the digital world of personalisation, choice and connectivity.

eLearning is in dire need of redefinition. So during our session, which takes place at 10.15am at Theatre 1 in Learning Technologies, Saffron and IBC are going to give all of you the chance to contribute to a new definition of elearning.

We’re going to crowdsource dozens of suggestions through a clever little tool we haven’t thought of a name for yet (the ‘physical widget’ has been suggested) and compile the results into a new definition which is fit for the new digital citizen, live-Tweeting as we go. If you miss the seminar, you can drop by Stand 36 to shape your definition and TweetPic it to us, like so…. 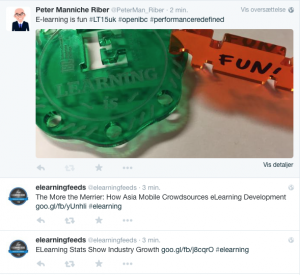 I hope you can join us. See you on Wednesday.