Embracing uncertain rewards and the implications for designing digital learning

Life is full of uncertainty. It is something most of us try to avoid and, for centuries, it has long been assumed that humans favour certainty over uncertainty, especially when making decisions. But new research published in the Journal of Consumer Research has thrown up some surprising revelations.

In ‘The Motivating-Uncertainty Effect: Uncertainty Increases Resource Investment in the Process of Reward Pursuit’, Shen, Fishbach and Hsee have found that uncertainty is more effective than certainty in boosting motivation towards a goal by creating positive, exciting experiences.

A study used to illustrate this point is the truffle test. Researchers asked a group of 138 students to bid for bags of chocolate truffles. One group were shown a bag containing four truffles, while another weren’t shown the contents but told that the bag either contained two or four truffles. Results found that participants bidded 125% more for the bag with either two or four truffles, than those who were certain they’d get four.

So, as odd as it may seem, we’re likelier to invest more time, effort, and money in pursuing uncertain rewards, even if they have lower potential value than certain rewards. This is because uncertainty generates excitement.

There are numerous examples of companies already harnessing the power of uncertain rewards. Uncertainty is the fuel that powers social media sites like Facebook and Twitter: users keep posting updates in anticipation of likes, shares, and retweets. It can also be seen in Pret a Manger’s decision to allow staff to give out a limited amount of free hot drinks and food to customers they like or find attractive.

But the power of uncertain rewards isn’t limited to making us squander our time on social media, or part with our cash. The implications for elearning are apparent and the advantages are abundant, not least in that they are inexpensive to put in place.

Building uncertain rewards into elearning needn’t be complicated. Many courses involve the collection of badges, which are awarded upon completion of each module. While this strategy might help keep learners motivated, Shen, Fishbach and Hsee’s findings suggest that it would be more effective to break up this fixed schedule of rewards.

It would be better to respond to learner interactions unexpectedly. For instance, if a course has a resources section with additional content, promote curiosity by rewarding learners when they open certain documents. Because humans crave predictability and seek patterns, even when they don’t exist, this will lead learners to engage more with the content, hoping to receive further rewards for similar behaviour.

Reward interactions also offer the opportunity to inject some humour into the course, or create a change of pace. For inspiration, take a look at the following example from email web app MailChimp.

They use simple, witty GIF animations as rewards throughout the user’s journey. 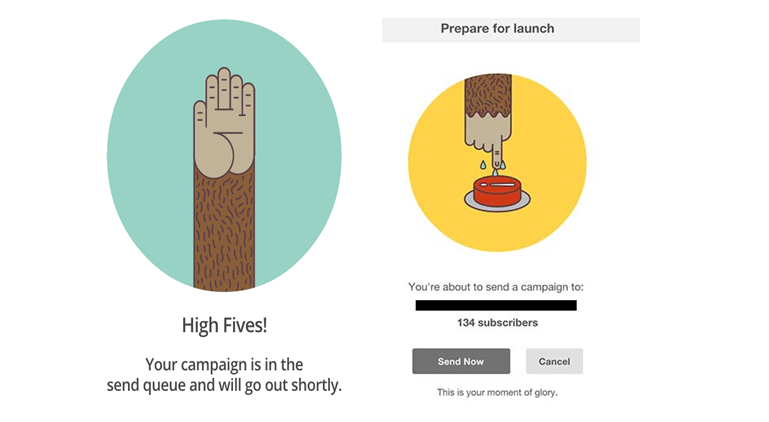 Understanding what motivates us should be of paramount importance to learning designers, as it allows us to better align our work to how people learn. Finding ways of building uncertain rewards into elearning is something we should all be doing: uncertain rewards increase emotional investment, draw attention towards the process rather than the outcome, increase enjoyment, and motivate people towards achieving their goals. All of these things are the raison d’être of digital learning… or at least they should be.